Learning from Informality – Architecture and Space of South American Barrios

In this contribution I would like to discuss ownership of space, at both a social and individual scale. I aim to cover thoughts that concern architects when attempting to design spaces that people can belong to, that in turn belong to people. I believe this notion applies to the Caravanserai project, and thus through this study hope to influence further development of similar projects across London and beyond.

Throughout this text, I will refer to the term ‘Social space’, a concept coined by philosopher Henri Lefebvre. Through my understanding of this notion, I will use the term to represent space moulded by cultural rules, values and ‘the outcome of a sequence and set of operations’ that are born from such principles, performed both as individuals and as a collective that inhabit it. Furthermore, I read it as the metaphysical reflection of social life and the society involved, and physical space that is born from this mentality. In his book Production of Space, Lefebvre specifically mentions the ‘vast shanty towns of Latin America (favelas, barrios, ranchos)’, as an example of social life being ‘transposed onto the level of urban morphology.’ That is to say, the spontaneous activities occurring in communities in such settlements shape the physical space and urban typologies of them, contrary to the capitalist mode of production we predominantly see in London today. 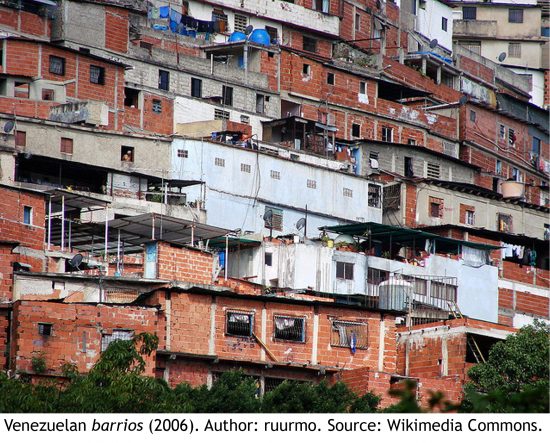 When the informal settlements in Latin America first began to emerge, there tended to be a constant un-settled element to them. This was due to the dwellers mentality that their settlements would be temporary. In the barrios in Caracas, this was due to migrant workers settling in such areas while looking for more permanent areas to live. In the favelas in Rio de Janeiro, this was the result of soldiers settling while awaiting payment. This temporal nature of the settlements was reflected in the use of materials to build, such as timber. However, as the dwellers moulded and appropriated space through activities of their daily lives (and acts of construction that ensued), this lead to the collective mental development of the sense of ownership. This change in mentality is also reflected in the materials used to build the physical forms of such ‘social space’, through the use of concrete and brick. This way, it can be observed that through the layering and development of ‘social space’ over time, an informal space is transformed to take on more of an established identity that can be measured and formally recognised, much like the barrios or favelas today. An idea that verifies this observation can be found in Felipe Hernández, Peter Kellett and Lea Allen’s book Rethinking the Informal City, where it is mentioned how through the material improvements of a settlement (as a result of the striation of identity) its status changes so that it ‘can no longer be classified as [a] slum’.

Those involved in the building process are very rarely construction professionals, let alone engineers. This being said, although exact figures are difficult to establish due to the favela’s unchartered nature, it is observed that many residents are involved in construction industry as unskilled labourers. Furthermore, as Fernando Luiz Lara explains in Hernández, Kellett and Allen’s book, the ‘process of laying foundation blocks, building a formwork out of wood, placing the steel reinforcement and pouring concrete is known to every construction worker’. In short, these construction workers learn building techniques of modern architecture through their daily jobs, and utilise these skills when building for themselves in the favelas. However, although these workers own such construction skills, they do not possess much knowledge on structural engineering. This results in haphazard structural formations supporting the favela buildings, where load bearing walls and reinforced concrete beams are used in abundance, so as to overcompensate for any lack of structural knowledge. Such structural aspects thus clearly defy any logico-mathematical rules that are usually prevalent in modernist architecture, while the communal involvement in construction is far from any capitalist ideology that ‘abstract space’ connotes.

John Turner and Robert Fichter’s book, Freedom To Build, summarises the flaws of modernist ‘abstracted’ high-density social housing projects. It outlines how importance should lie in the dwellers ability to ‘maintain environments that serve their material and their psychological needs when designing housing. Through this act of personalised maintenance, space is translated into a form that accommodates best the activities of the dweller.

Further points raised by Turner were those of the role of the architect and the public body that hires him. These bodies were to be less of a ‘provider’ and more of an ‘enabler’, and that buildings should take on more proscriptive (thou shalt not) roles, rather than a prescriptive (thou shalt) stance. To add to this, points were raised on the importance of inhabitant participation in the case of the improvement of informal settlements. In other words, Turner argued that offering freedom to build to residents (setting only specific restrictions) could lead to better environments than prescribing what to build or offering pre-designed housing. Turner’s comparison to this regard is with that of street traffic in a city (thou shalt not) in contrast to the fixed route of a railway. 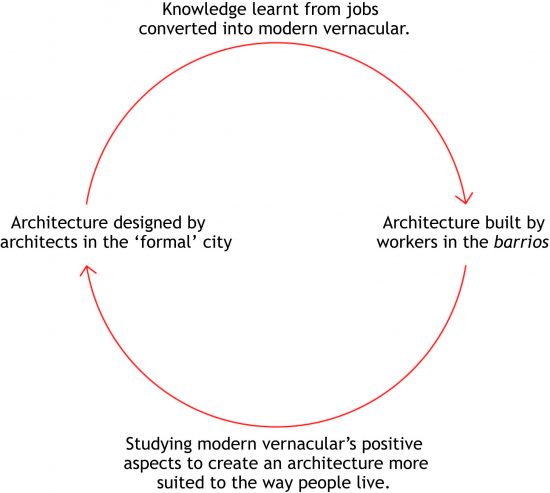 From the study of building typologies in the barrios and the failure of prescriptive social housing, it becomes clear that elements of ‘social space’ found in the barrios must be referred to if architects are to produce architecture more apt for human activity in the future. Space must be treated as fluidly as it is by the inhabitants of the barrios, where it is freely moulded to suit. Furthermore, positive elements of communal construction must be reviewed, and used in conjunction with construction expertise that exists in the formal building industry. To conserve the beneficial properties of social well-being brought about by the involvement of the dweller during the design, construction, or management process, new attitudes towards professional-community relationships must be developed. Architects must ‘be trusted to work with them, rather than for them’, in order to understand the way they live and occupy space. Through this cooperation, I believe an architecture corresponding to the activities of the dweller (much like the physical manifestations born from the constant alternations of ‘smooth’ space and ‘striated’ space as seen in the barrios) will prevail.