As makeshift shelters constructed from found wooden panels began to envelop the hillsides of Lima, Peru, the country’s president and architect, Fernando Belaúnde, began to consider how exactly the government could hope to address the ever-growing housing demand of the city’s urban poor.

Between 1940 and 1972, Lima experienced unprecedented levels of urban growth, as its population increased from just 650,000 to 3.5 million inhabitants, mostly residing in informal settlements around the existing city as squatters. Several mass-housing projects implemented by the government, in conjunction with a proposed modernist masterplan of Lima, the “Plan Piloto”, heavily influenced by CIAM’s “Athens Charter”, collectively failed to address the city’s housing demand or curate and control its rapid expansion. Between 1949 and 1956, the Peruvian government managed to build a dismal 5476 dwellings, while 50,000 homes were built by Peruvian families in the same time period, independent of any financial, legal or administrative assistance.

Although land settlements grew in inorganic layouts, lacked provisions for public or commercial spaces and utilised the most basic of resources, they clearly demonstrated the people’s agency, in the skill and organising capabilities necessary to construct the barriadas. As noted by British architects and founding members of Team Ten, Alison and Peter Smithson: “the short narrow street of the slum succeeds where spacious redevelopment frequently fails”.

The remarkable feat achieved by the urban population and the evident failures of previous mass housing projects, prompted Belaúnde, amongst other leading architects, to develop a new design strategy for mass housing projects in Peru; through seeking to unite the community spirit of self-construction embraced in the barriadas with that of large-scale government-subsidised interventions. The self-constructed barriadas, formerly scornfully perceived as the physical manifestation of the government’s inability to provide adequate housing, had suddenly entirely transformed the architect’s approach to housing design in Peru. This elicited the foundation of the experimental housing project PREVI (Proyecto Experimental de Vivienda).

The first phase of the PREVI project entailed hosting an international competition to design and construct a community of 1,500 low cost dwellings. A number of participating architects were leading members of Team Ten, including Aldo van Eyck, Georges Candilis, Shadrach Woods and Oskar Hansen, in addition to James Stirling, Christopher Alexander and Fumihiko Maki who had also had previously collaborated with the group. Proposed dwelling units were to be seen as a host structure that would become a part of a cycle of evolution. Although the original dwelling unit would be constructed by a contractor, later additions were to be undertaken by the families themselves, with technical consultations and assistance provided by government affiliated planners and architects, thereby encouraging self-construction. The project intended to address the housing needs of low-income families who could afford to meet monthly repayments on a low interest purchase loan for a basic dwelling unit.

Despite the avant-garde nature of most proposals, participating architects did not refrain from confronting the raw, complex reality of the housing crisis in favour of utopian solutions, but rather used the constraints presented by the highly challenging, politically charged brief to propel their creativity. All thirteen invited architects visited the project’s site, various squatter settlements, urban slums, government housing projects, site building operations and building component plants prior to commencing their design proposals. In the spirit of discovery, one participating architect, Christopher Alexander, even ventured to live in a barriada for two weeks as a means of conducting research, so as to develop an in-depth knowledge and understanding of the typical Peruvian lifestyle.

He made a number of interesting observations, for instance, regarding how Peruvians preferred to socialise in alcoves, and implemented them in his dwelling unit design proposal, which consisted of primarily open spaces, with curtains provided, so that smaller spaces could be created if necessary. Alexander thereby demonstrated that inventive design solutions often come to fruition as a result of a direct participatory study of and engagement with the project’s future inhabitants.

Alexander also intended to conduct a full survey of the future inhabitants of PREVI prior to construction, so as to determine how many family members would occupy each unit and what they required most from their dwelling. The completed surveys would be returned to the architects’ office, who would compile the given information to individually design each dwelling unit to every family’s specific requirements, so that no two homes were the same. The competition jury described Alexander’s design proposal as making a “commitment to the dignity and worth of the individual, his family, his belongings, his neighbours, and the entire community”. Alexander’s proposal had demonstrated that recognising the value which people and communities bring to architecture was paramount to creating effective design solutions.

PREVI’s resolute progress came to an abrupt halt when an unforeseen change in political circumstances led to a lack of government funding, forcing the development bureau to downscale the project from the original 1,500 units to just 500 units. This was detrimental to the ideas set out in the project brief and to the extent of the financial investment made in the project, as the majority of proposals aimed to test out costly prefabrication methods for future mass production, which became entirely inapplicable. These innovative fabrication methods required custom-made components which the inhabitants could not afford to purchase, causing them to defer back to traditional construction techniques. As stated by Alfredo Pini, of Atelier 5: “none of the houses were expanded using our system, because the elements had to be purchased”. 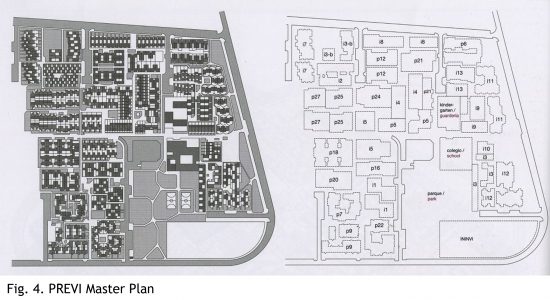 Likewise, political unrest significantly inhibited opportunities for collaboration between the original participating architects and the development bureau in the final masterplan design of the PREVI neighbourhood. A patchwork of the winning proposals, the final masterplan bore an uncanny resemblance to Atelier 5’s proposal, for which, in the words of architect Alfredo Pini, “Le Corbusier was our model.” Considering that the PREVI project had aspired to transcend previous failed mass-housing prototypes and that many of the participating architects were members of Team Ten, intrinsically critical of Le Corbusier’s work, a preference for a modernist masterplan design appears to greatly compromise the very foundations of the project.

In spite of the shortcomings of PREVI, all constructed dwellings were successfully adapted and expanded by their inhabitants, in most cases far surpassing the way in which the architects had expected them to be altered. In fact, most dwellings have undergone such a radical transformation that it can be quite difficult to decipher what the original dwelling design was. The PREVI neighbourhood of today is a fourty-year strong, middle-class community with an abundance of flourishing local businesses and a safe living environment. Unlike the majority of residents of social housing projects, the inhabitants of PREVI did not abandon their neighbourhood once they had acquired some wealth but have stayed put, perhaps due to the instilled sense of pride and ownership developed from directly partaking in the construction of their own homes and neighbourhood.

Belaúnde and his contemporaries identified self-construction as a key factor unique to the context of the housing crisis in Peru, that could be used as a means to develop an effective, site-specific solution. Providing greater design constraints individual to Lima led to an outpour of inventive housing solutions in the PREVI design competition, thereby challenging previous universal modernist housing principles, which entirely dismissed the distinct context in which they were to be enforced. Likewise, although there is much discussion surrounding the housing crisis in London, and the way in which it resembles that of many other modern metropolises, perhaps it would be beneficial to delve deeper into the specifies of London’s modern history. Particularly, the way in which existing conditions within the city could be used to consolidate current housing solutions, rather than advocating solely for large-scale urban development projects as a means to meet housing demand.

Also, as evidenced by PREVI, housing developments which encourage the formation of strong, prosperous communities thrive in time, circumventing the typical fate of most housing estates. The extent of the research and careful study of the prospective inhabitants’ living patterns, in addition to the provisions made for future local businesses, schools and safe public spaces, eliminated commonplace issues and aided community development. Whilst the precedent of self-construction may not be applicable in London, this does not detract from the fact that many other forms of community participation characterised the effective realisation of PREVI. Through its successes, the project clearly illustrates the importance of direct engagement with future inhabitants, from the outset of the design process, which is made all the easier with the prevalence of social media today. PREVI exemplified that government housing projects could work in collaboration with the inhabitants’ initiative, and is, in many respects, an inspiring success story. 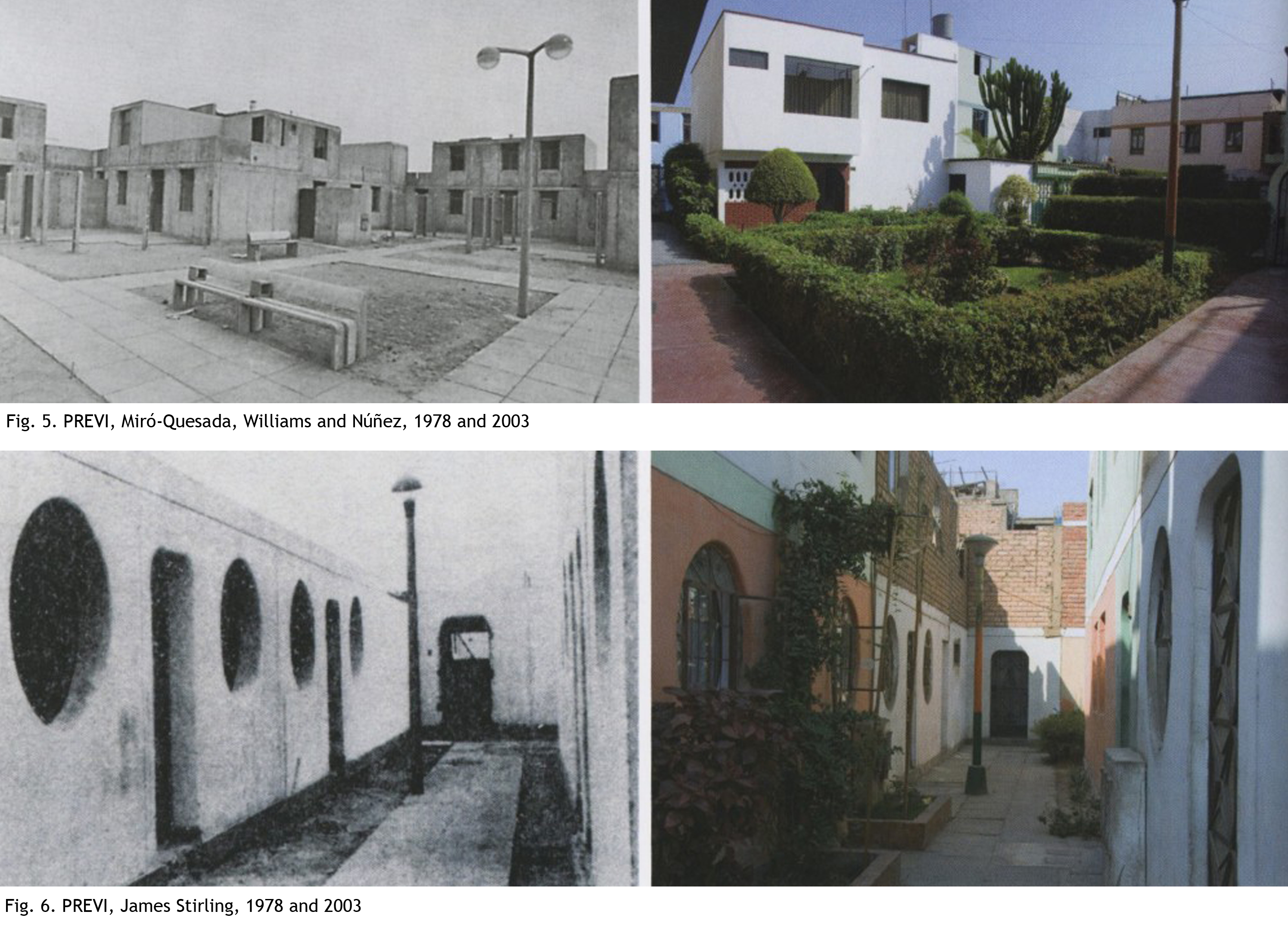