Food as a network: utilising waste in cities of excess « Canning Town Caravanserai

Food as a network: utilising waste in cities of excess

If proponents of the ‘smart city’ are to be believed, enhanced urban networking is the path to less a divided and more efficient urban future. Such a vision of the city is smooth, clean, and spaceless – but what about those other, less sanitised circulations that also hold the city together? Focusing on food networks in London, this piece argues for real spaces as an essential part of waste reduction, food justice, and forging alliances in the city.

The solution for making more efficient use of the city’s limited resources and distributing them more equitably is often sought in the ‘smart city’. Omnipresent measurement and automation, the notion suggests, will synchronise the rhythms of the city, avoid duplication and minimise waste. We might imagine this networked city as clean, sleek, with minimal friction. Instantaneous communication erases distance and material obstacles and decreases the need for physical meeting spaces. But does this vision really reflect the city as we experience it, or as we should hope to experience it in the future?

To avoid falling into narratives of dematerialisation which often pervade technocentric readings of the city, Matthew Gandy has employed the metaphor of the city as a ‘cyborg’ – a space where what he calls ‘meat space’ and ‘virtual space’ merge. If the city is such a hybrid organism, then its metabolism is not just powered by electrical currents and communication signals, but also by flows of very much material, often grimy, smelly, or dirty substances – food, water, waste. In an effort to counter technical solutionism, we should consider how the disparate parts of the future city, too, can be linked not only by imperceptible Wi-Fi or new apps but also by these ‘metabolic’ circulations.

It is no secret that London is a focal point of unequally distributed resources – and this is not only true in the arena of housing, with luxury flats used as investments empty year round while the majority of the city’s residents are overcharged for sub-standard accommodation. The rising cost of living combined with long-stagnant wages has also meant that more and more Londoners cannot feed themselves and are forced to collect donations from food banks. The largest network of foodbanks in the UK, the Trussell Trust, recorded a tenfold increase in use of foodbanks in London in the past five years, mirroring the overall trend in the UK. At the same time, there is no shortage of expensive food outlets, and countless potential meals are tossed at the end of each day. The hospitality sector in the UK alone wastes the equivalent of 1.3 billion meals per year.

As awareness of food waste has increased in recent years, big supermarket chains committed to reducing food waste, and even top-level chefs also gotten on the bandwagon. Once the will to waste less food is established, it becomes, above all, a logistical problem: food that is nearing its use-by date needs to be distributed quickly and efficiently to make sure it is actually used at the point of delivery. Numerous charities and startup businesses therefore use online platforms and apps to connect producers and recipients of surplus food. Virtual coordination is needed to put these two sides in touch, but we should not underestimate the importance of real spaces for human interaction beyond online echo chambers. These might include people who have no access to the internet, allow the intersection of disparate groups, and potentially lead to new alliances, beyond a short moment of exchange.

The Brixton Pound is a community currency that has been around since 2009. Created as a response to the financial crisis, its initial aim was to support independent local traders and keep money circulating in the community. It has become one of the prime examples of local currencies, with the equivalent of £200,000 in circulation and 250 businesses accepting it.

Recently, Lambeth Council offered the Brixton Pound access to of an unused storefront space, in between Brixton’s bustling markets, the gentrified shipping containers of PopBrixton, and what was once known as the ‘frontline’ between locals and police on Railton Road. The café that has evolved here over the past year serves as a meeting space for tenant associations, mosaic workshops for children, yoga classes, or band practice sessions. In addition to establishing alternative economies through the local currency and events such as clothes swaps and repair workshops, the establishment of the Café has allowed the Brixton Pound to tap into a different kind of urban circulation – that of food.

In collaboration with existing surplus food distributors such as FareShare and PlanZheroes, as well as vegbox delivery schemes, the Brixton Pound Café has been able to provide the physical space that allows these networks to intersect – it becomes a node in which these circulations of food can also serve to link people. In the café, surplus food undergoes a transformation – this requires spaces for storage, preparation, and consumption, as well as the energy and creativity of volunteers and staff who quickly conjure up meals from (sometimes odd) combinations of raw materials. Meals are then sold to customers on a pay-as-you-feel (or what you can) basis. In this way, surplus food links disparate parts of the city: £12 loaves of sourdough bread from Borough Market that would have ended up in the bin after just one day might be reincarnated in a sandwich eaten by someone who would not usually buy their lunch there. During so-called ‘Sunday Feasts’, volunteers and patrons jointly prepare lunch from surplus ingredients – sharing knowledge about food preparation as well as a meal with strangers.

Like the wasteland used for Caravanserai, the Brixton Pound thus transformed previously unused resources to become a point of intersection and exchange: of currency, of experiences, and of food. Creating this type of urban value – one that is more than the sum of its (discarded) parts – requires a physical space that allows for chance encounters and the slow building of loose social ties. If the networked city of the future is to consist of both virtual and real spaces, we should not forget the less pristine sides of the city – its wasteland, its wasted good and foods – in thinking about its potential. 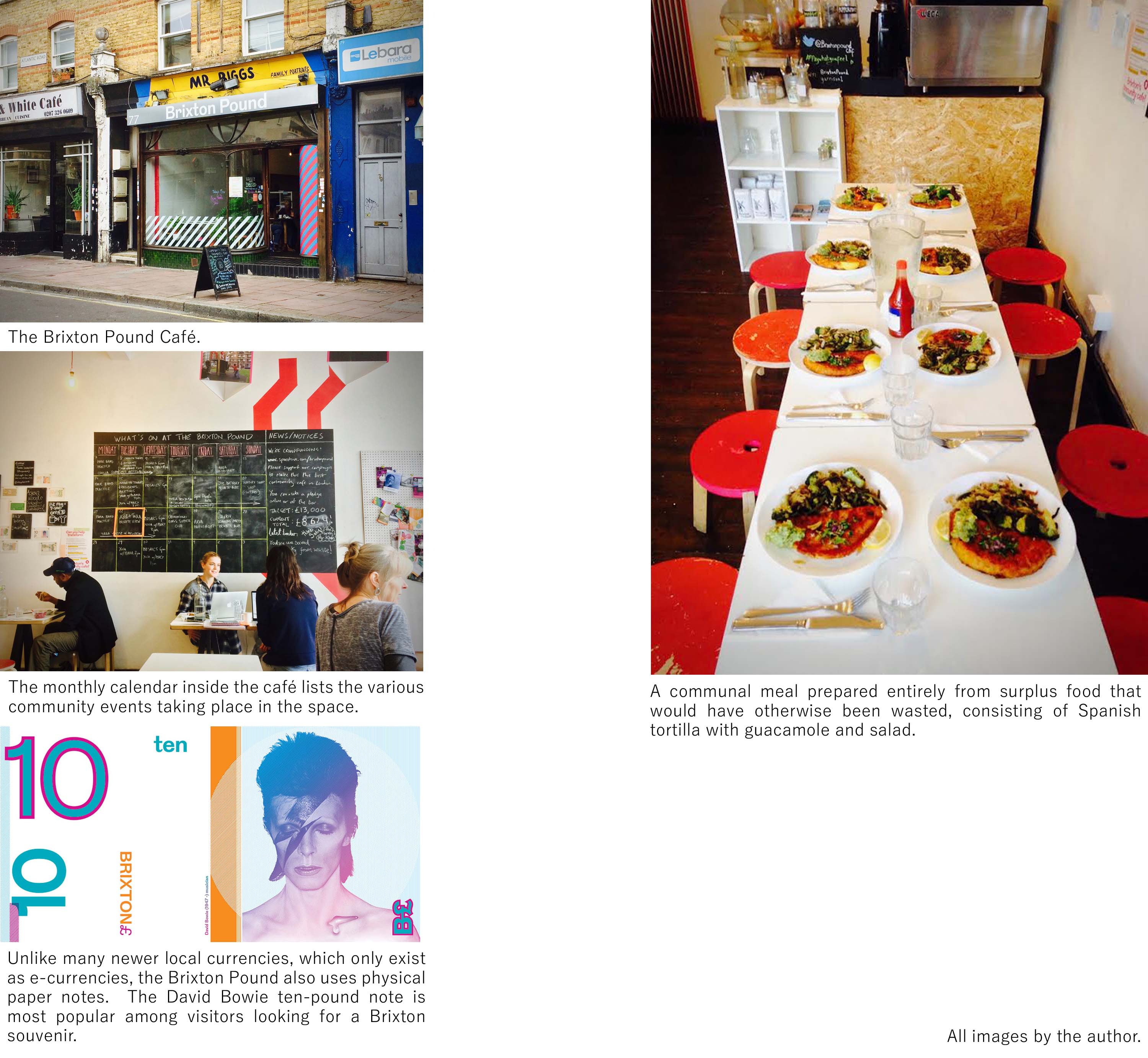