The Phantom of Harmonie 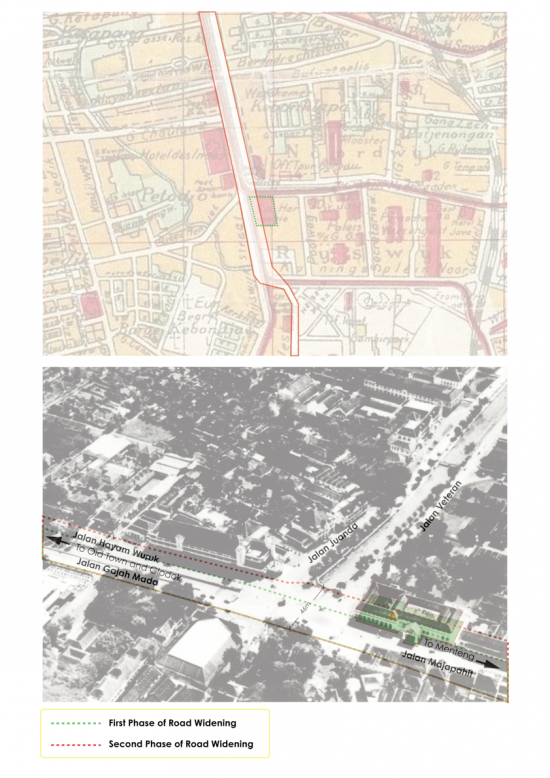 In this contribution, I would like to reflect on the production of public space in Indonesia’s capital city of Jakarta through the dramatic demolition of a historic clubhouse known as Societeit de Harmonie. As part of a wider PhD research, I observe an interesting negative correlation between the sense of ‘publicness’ of an urban space and its physical maintenance. As Dehaene and De Cauter (2008, 2) argued of Piazza Navona in Rome, I similarly suggest that the Societeit de Harmonie demonstrated the transformation of a ‘heterotopia’ into a public space [1]. The gradual decay and eventual demolition of the Societeit de Harmonie quite counter-intuitively crystallised its public identity; its significance as a public space is therefore retained not through its physical presence but rather its longing and memories.

Designed in a neoclassical style, Societeit de Harmonie represented the class-based and racial discrimination of the colonial period. When Societeit de Harmonie was first opened in early 1815, it acted as a ‘harmonious’ social gathering house for the European elite from diverse countries, which was especially significant after the Napoleonic wars in Europe (1803-1815) [2].

The appeal of a new clubhouse equipped with various social amenities such as a library and a game room convinced many settling Europeans in the nineteenth century to move away from the congested Old Town Batavia (as Jakarta was known then) to the district of Menteng in the south, which has remained an elite neighbourhood to this day [3]; Societeit de Harmonie later became included in the Monumenten Ordonnantie 1931 (‘Ordinance of Protected Buildings 1931’), which was established to preserve historic buildings [4]; After independence, in the late 1960s it was used briefly as a tourism office and subsequently as headquarter for the Gabungan Importir Nasional Indonesia/Ginsi (‘National Import Association of Indonesia’). Despite the functional changes of the building, according to its last occupants, it remained physically unchanged, until various government personnel came to remove the chandeliers and furniture. In promoting anti-imperialist ideology in the 1960s, President Sukarno had in fact instructed the demolition of the structure deemed to represent elitism, oppression and colonialism, but it was not executed.

Ironically, it was the first master plan of Jakarta, RIK 1965-1985, in which an extension of Gajah Mada Road southward was proposed, which consequently removed the clubhouse from immunity. Societeit de Harmonie was removed from the Monumenten Ordonnantie 1931 and subsequently demolished to make way for the expansion of Majapahit Road. An earlier road expansion had first removed its protruding portico, absorbing it into the adjacent road. The complete demolition of Societeit de Harmonie in 1985 remarkably doubled the road width to 46m, which was necessary to accommodate the increasing volume of vehicular traffic, as shown in the map and figure.

Although many considered the disappearance of Societeit de Harmonie to be tragic, the demolition effectively generated a nostalgia, which—through the clubhouse’s ambivalent reputation—rendered it a greater public relevance. The phantom of ‘Harmonie’ today materialises as a major transportation hub and a lively urban intersection, whilst remaining a critical point of orientation for the urban population of Jakarta.

Michel Foucault. Discipline and punish: the birth of the prison (1979), Harmondsworth: Penguin Books.

1 Heterotopias are used to combine enclaves and armatures, in order to be more inclusive, accommodating of diversity and differences within the city. For Foucault (1979), heterotopias are like miniatures of urban ecology, with interdependent components, ‘each with their own spaces and codes, all within one perimeter’. (Shane, Urban Design Since 1945, pp.37-38)
2 Tempo, 11 May 1985; Even though construction was started during the Dutch rule, the clubhouse was in fact completed during the brief invasion by the British between 1811 and 1816, and it was opened by Sir Stamford Raffles in 1815.
3 By this time, the Old Town near the port which had become largely commercial gained the reputation of being highly congested and unhealthy. Many wealthy families moved to the south for a better quality of life.
4 According to Adolf Heuken in his Historical Sites of Jakarta; Tempo, 09 March 1985, Societeit de Harmonie was the oldest European style structure in all of Asia at that time. The building had three recognisable aesthetic styles, combining Greek, Dutch and French architectural characteristics. The Monumenten Ordonnantie 1931 was established by the colonial government to conserve historic buildings in the colony.
5 I am grateful to the staff at Pusat Dokumentasi Arsitektur (Centre for Architectural Documentation), Arsip Nasional Republik Indonesia (National Archive of Indonesia) and Perpustakaan Nasional Republik Indonesia (National Library of Indonesia) in Jakarta for their kind assistance during my research.

Note: A version of this article was first published in Cambridge Architecture Journal, Scroope, Issue 25, published in 2016.