on the South « Canning Town Caravanserai 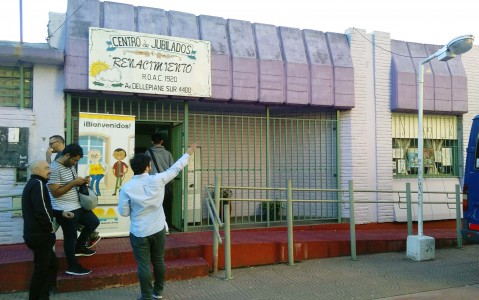 I’m going to a meeting in Comuna 8 in Buenos Aires today.
I’m not very sure what the meeting is about but a good friend and colleague has invited me, so here I am, sitting in her car and looking at a paper guide and to the somewhat – but never enough – familiar buildings. It’s the first time I have come here in a car and not by bus, and there is something simultaneously disorienting and unsettling about it. But my friend knows what she’s doing, so I just let myself flow with her.

The middle class never goes to the South.
That’s, amongst other things, why I started going – I could never believe how the city is subdivided into such two clear parts, and everyone has naturalised them. People from the South do go to the North: for work, for paperwork, for entertainment. Those from the North, however, never go to the South. They consider it ‘far’. This ‘farness’ does not take into account actual distance: they would very readily go to a North location laying much further away, if measured in miles, than the South locations they refuse to even consider. No – the distance is symbolic. And I can never fully believe how everyone has naturalised this to such degree in a city that considers itself open, homogeneous, democratic.

I did not only start going to the South as much as I could (eight years ago I moved from BA to Cambridge, and later London, which did not help!), but also to study it. I wanted to start bridging this gap. Not only that: I wanted to start understanding it. Studying the history of the South was in fact the ideal excuse to go there each time I visited Buenos Aires, to talk to people and to dive into archives, old maps and forgotten community leaflets. I wrote a whole thesis about this. Still I am not really sure I am understanding things enough as to bridge any gap, or to positively help anyone.

So here we are, on arrival – I expect somewhat of a participatory planning meeting, but we’ll have to see. Of the whole ‘South’ (I’ve been using this overarching term for a territory which is in fact massive and extremely complex), we are in the North-East corner, in a location whose history I wrote about but which I do not know enough about in the present situation. Let us see what the community has to say today. I hope I’ll be able to give back one day to this city which has taught me so much and shown me so many layers.