Warning: "continue" targeting switch is equivalent to "break". Did you mean to use "continue 2"? in /customers/7/7/4/caravanserai.org.uk/httpd.www/wp-content/plugins/siteorigin-panels/inc/styles-admin.php on line 392 Caravanserai – A Canning Town Treat « Canning Town Caravanserai

I arrived in Canning Town tube station with another classmate after an uneventful ride in the London underground. We promptly found our English professor and fellow Berkeley classmates waiting near the exit; once we all congregated, we began our walk toward Canning Town’s temporary community space called Caravanserai. We were fortunate to have our tour be on such a sunny and pleasant day (who likes to be cooped up in a classroom when the weather is this nice, anyway?) There, we were welcomed by Che, the Caravanserai main organizer, and he gave us a tour, during which he described the different structures in Caravanserai.

I had a very positive impression of Caravanserai – the first thing many of my classmates and I noticed was the warm welcome sign reading, “Open for Everyone!” I appreciated that the space was very child-friendly, including structures such as a seesaw, wooden swing, and a stall that was set up to be a kids’ play space. Though Caravanserai resembles a playground in these respects, it has other unique features that make it attractive for all ages. There is a kiosk selling food and drinks, communal fire pits, and a shed for performances. We learned that many of the structures at Caravanserai are made with recycled materials, and powered by solar energy. As an environmentally conscious Berkeley student, I fully approved of these practices. 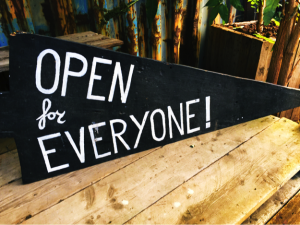 I really enjoyed our fieldwork (the grownup, college version of a fieldtrip) in Caravanserai, and I decided to go back a few days later on Saturday with another classmate to watch its production of Macbeth. When my friend and I arrived, there were already many people eating food sold from the kiosk, seated at the ‘World’s Longest Table.’ My friend and I bought food and our tickets (the price tag of ten pounds for a meal was a bit steep, but the food was good). It was a very pleasant scene of bonfires, a full moon, and lots of people eating and chatting. The crowd there was trendier than average, which has been my recurring experience with London theater.

The play began just after eight P.M. – this was my first time seeing Macbeth performed live, and I was excited. Interestingly, the entire cast consisted of just three women actors, who would switch characters on-stage by changing the paint markings on their faces (we were given cards to help us identify each character based on their facial markings). Furthermore, this was not your typical, stationary play: we started out in the shed, moved to the garden, then to the World’s Longest Table, and then back to the shed again. My friend and I sat at the very front for the final segment of the play in the shed. This made the experience all the better, for we could really see the actors’ expressive faces, and the specific details of their performances. I loved the play, and found it to be powerful and entertaining. 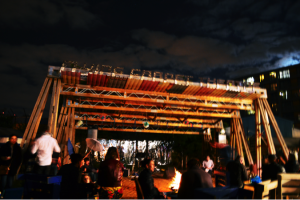