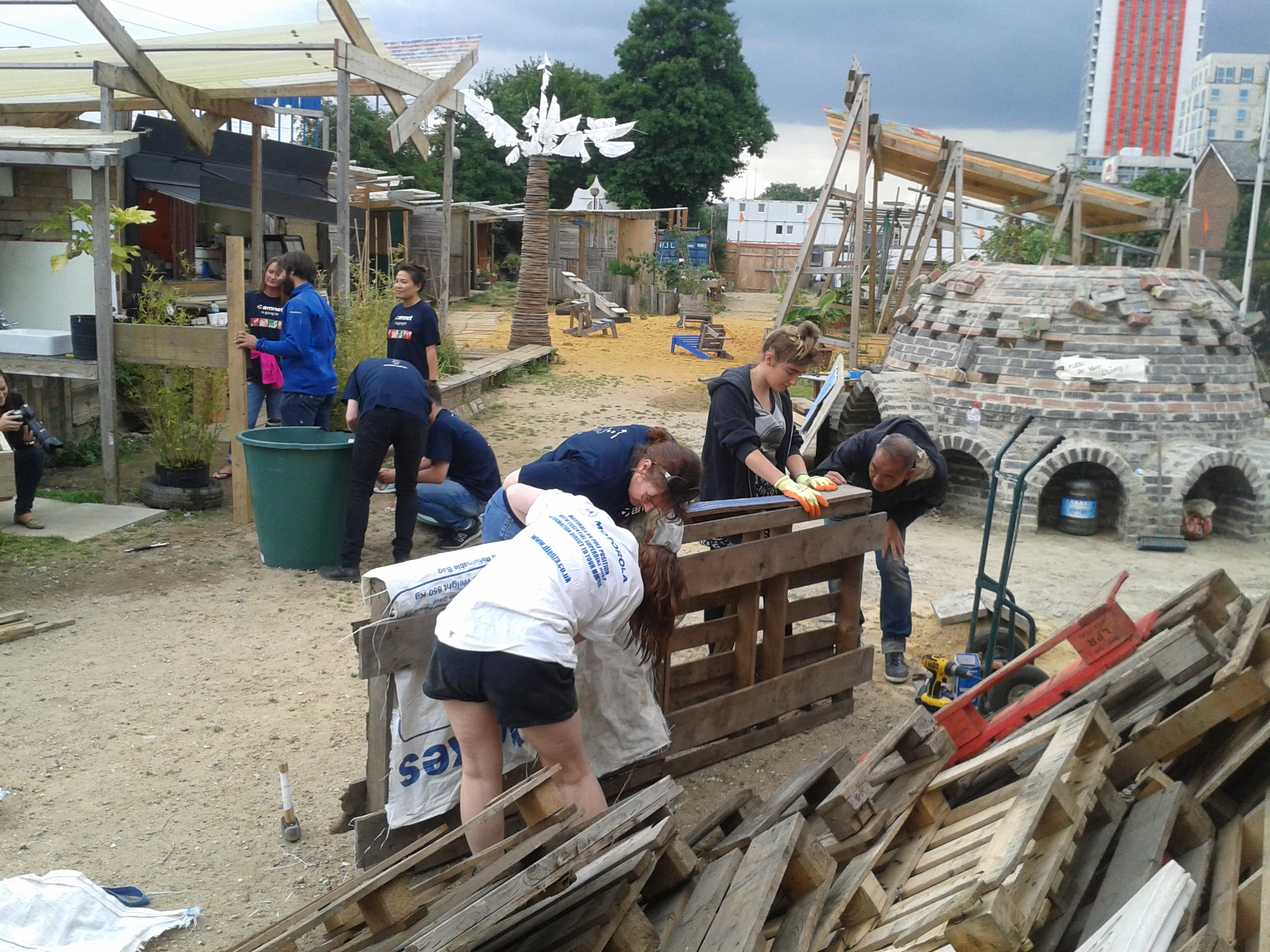 On the 8th July the Canning Town Caravanserai (CTC) and its team welcomed members from AMNET to take part in a day of workshops co-hosted by Project Dirt. The aims of the day were to engage participants with recycling, design, building and growing -all aspects that are characteristic of the site itself. Introductory talks gave a deeper picture of the project’s temporary condition as a meanwhile space and its purpose to activate what would otherwise be a disused, empty plot of land. The story of the Caravanserai as a community resource offering trade, training, performance and a community garden also gave insight to some of the intriguing structures surrounding the visitors. Shortly after the talks, the aroma of food from the kitchen trailer led the group to lunch where chicken, rice, salsa and other homemade dips with wholesome ingredients were served and enjoyed on the site’s long table.

It was an early start for the CTC team earlier that day, who spent the morning making final preparations for the day’s workshops ahead. Stacks of palettes and scaffolding poles were set aside for the vertical gardening workshop titled ‘Mint Thyme’ by one of the CTC workshop leaders and upcycling enthusiast, Joseph. The challenge for this project was to build vertical frames using scaffolding poles and to dress the structure using palettes fitted with rice bags. The bags would then be filled with soil and over time produce mint, thyme and other herbs growing through a kind of ‘garden wall’.

To reach a completed vertical garden structure was an ambitious goal for one afternoon for the small team, however a clear vision of the end-product enabled the participants to engage well with the exercise and were also encouraged by their own progress.

Just beside the vertical gardening workshop, a second team were underway with designing a rainwater harvesting system using a collection butt, guttering and plenty of other material such as wood from the adjacent Flitched yard available to help complete the structure. Once the more technical aspects of building the system were resolved, the team began celebrating their work by adorning it with leaves, flowers and also painted the rainwater butt! This workshop also came to show how the outcome can often change quite far from the initial plan and that the building process is a design process in itself as well as a negotiation (the team were often caught in debate about different ways in which the system could be erected!).

In the meantime, the third and final workshop team were assigned to carry out some digging work to help create a trench and also learned how to mix cement by workshop leader Silvio. The cement was then used to secure some fencing required as a lean-to support for a greenhouse on the site. Many of the team’s participants enjoyed the physical aspect of the workshop and which the CTC volunteers are used to carrying out on a regular basis. A tea break served with homemade treats including pineapple upside down cake and carrot cake were enough to re-energise the teams for the rest of the session.

A downpour at the end of the afternoon finally prompted the workshops to conclude for the day but fortunately the concrete had been poured and covered in time. Other workshop tasks were coming to a close and participants were able to take refuge in the Flitched yard with some final drinks and conclusions for the day, not to mention some interest taken in the colourful steel pan drums lined up within the space. Conversations flowed into the wider activities of the site such as the drumming workshops and gardening and also some feedback for the day, with some admitting to being challenged by building as a process while others were thinking about when they could next return to get stuck in again!

The CTC team thoroughly enjoyed the experience of co-ordinating the day with all those that took part and look forward to welcoming AMNET back and working again with Project Dirt very soon.