Self Made City: The Future of Regeneration ? « Canning Town Caravanserai

Self Made City: The Future of Regeneration ? 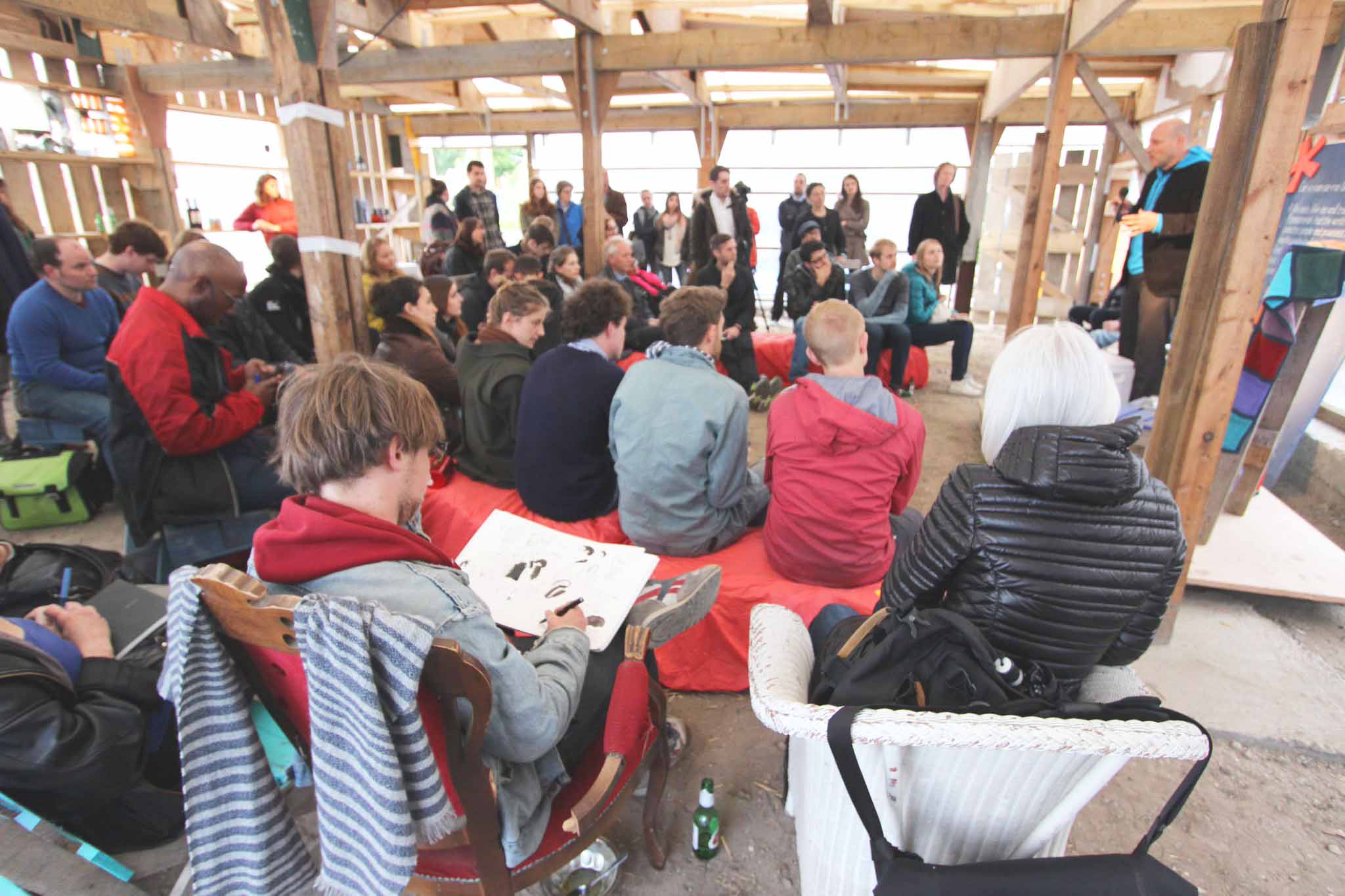 This article is written in the light of the ‘Self Made City’ symposium held at Flitched, Canning Town Caravanserai, in East London on Saturday May 10th. This was the London venue of a series of talks based on the book by Kristien Ring which describes the development of Berlin’s baugruppen model of community-based self-build housing projects. These schemes have taken Berlin’s image as a centre for alternative lifestyles and artistic creativity and made it in stone. The trend for self-built property also exists in the rest of Germany and Holland, subject to local planning controls.

The conference was held at the same time as the ‘Grand Designs Live’ exhibition, 15 minutes walk away at the Excel Centre and based on the popular TV series, and National Custom and Self-Build Week 2014. This reflects a strong interest in self-build projects in Britain. Would-be homebuilders have to face a legal and financial system unused to the needs of people working outside the conventional housing market. The main barrier to projects in Britain, (especially London) is the cost and availability of land. Kevin McCloud, presenter of Grand Designs has commented on the lack of new projects to be featured in his series. Early editions of the programme included community self-build schemes in Birmingham and the South Coast, and a similar schemes existed on the Isle of Dogs in London’s Docklands during its redevelopment in the 1980’s. Most British self-build schemes appear to be carried out by the very wealthy or by insiders, architects, builders and property developers.
The symposium raised issues for architects, planners and others interested in the built environment, this article looks into the feasability of community custom build schemes as a solution for future urban regeneration.

The roots of the self-build movement in Berlin have their roots in the city’s history. The division of the city during the Cold War created a need for both East and West Germany to create a showpiece for their different political systems. Between 1945 and 1990 the city effectively duplicated many of its art galleries, conference centres, opera houses and other public spaces. Berlin, as a frontline city, was home to the military and secret installations of the four occupying powers as well as the two Germanys. These differences between East and West also added to the oversupply of buildings in relation to the total population. East Berlin was a capital city of a totalitarian state with all the bureaucratic, centralised facilities that were demanded. The Western portion operated as a militarised outpost of the capitalist world. One effect of this was to isolate West Berlin from West Germany’s post-war economic growth. The city also had a unique political status separate from its ‘mainland’. One feature of this meant that civilians were exempt from military conscription. The city became an escape for those not wishing to conform to mainstream society. After Re-unification, the spaces into which new ideas could be developed grew. Colonies of like-minded people began to assert control over their situation, moving from rented accommodation to squats to planned new-builds adapted to their owners needs. This movemement well financed due to subsidies to West Berlin and later for re-unification. Private finance could then move into an established regeneration scheme. Berlin had excellent transport and public utilites for these projects has become viable, architectural and design services helped to provide high quality results.
Self-build projects have achieved a critical mass in Berlin and this has meant that the dreams of clients and designers alike can become reality. The main challenges facing those wanting to recreate a similar situation in London or the rest of Britain come from the lack of suitable plots, lack of planning support and lack of financial support. Legislation introduced by the coalition government gives citizens a right to demand plots of land from their councils. Where this is possible, self-builders still have to obtain funding, which in current conditions will be more expensive than buying in the conventional market. Despite interest in self-build, the future appears to follow the fate of self-build experiments on the Isle of Dogs in the 1970’s and 1980’s where the motivation of pioneering campaigners provided a small number of homes but was limited by financial downturns and political suspicion. These barriers to growth pushed the self-build movement to the margins of the construction industry, London Docklands was redeveloped by corporate finance and a large amount of public sector infrastructure projects.

The current trend for urban building projects has been based on this model; and this has replicated the cityscape of London’s Docklands across other areas undergoing regeneration. This has worked best in dense commercial areas as they develop a functional atmosphere at least during working or shopping hours. Residential projects inside redevelopment zones are much harder to grow fond of, wether they are for owner occupation or for rent. These areas, can appear soulless and artificial, particularly if isolated in any way from older housing. The self builders of Berlin and London’s Docklands tell us that redevelopment need not be so capital-intensive. A community self-build project on such a site allows a bond to develop between the future inhabitants and the location. For such ideas to develop, society will have to adjust its ways of thinking about the house building process.

The range of homes created by Berliners came about through the determination of residents and designers who adapted existing buildings and took over empty spaces. They acted, to paraphrase the Bayern Munich attacking midfielder Thomas Muller, as raumdeuters (space detectives); inside a city of derelict areas. The opportunity to transform London’s post-industrial areas has largely been lost to commercial development. Unused sites still exist, but they are harder to track down. These locations are often away from designated redevelopment areas but inside the inner city.