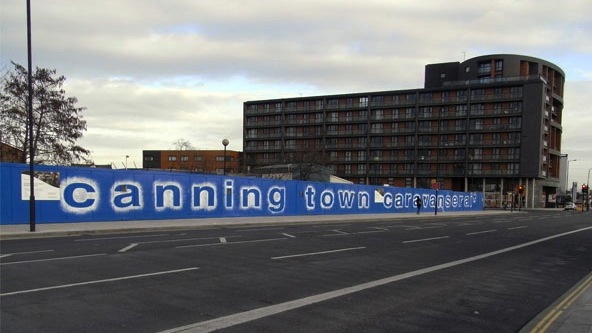 The Canning Town Caravanserai is a living experiment in regeneration in the new economic reality. Located on a brownfield site near Canning Town station, at a key east London ‘crossroads’, the Caravanserai captures the essence of far-flung oases on distant trade routes animated by the exchange of goods and ideas from around the world, contributing to the flow of capital and investment.

As one of the winners of the Meanwhile London competition – which aims to show how interim uses can stimulate regeneration by releasing creative energy, drumming up interest in an area, shaping its future, and bringing in investment – the Canning Town Caravanserai is an embodiment of the Government’s Localism agenda. It has harnessed creative ideas of place, sourced and used local resources innovatively, and secured the voluntary time of local organisations, students, and professionals to drive forward development.

Why, then, are projects like this left to creative communities and social entrepreneurs to drive forward? Where is the support, both financial and practical, to make creative local endeavour valued and successful? Last week, the Government announced a fifth wave of Neighbourhood Planning Front Runners, bringing the total to 234 communities which aim to shape development in their areas using the new neighbourhood planning powers introduced by Sec.116 of the Localism Act 2011. Each Front Runner receives £20,000 to take forward their proposals, so do the math (that’s £4.68m to date, with £50m earmarked to 2015). Meanwhile, ‘meanwhile’ projects which are practical regeneration projects that stimulate micro-economies and prepare the ground for investment often survive on a shoestring.

The jury is out on whether neighbourhood planning can deliver the growth the Government wants. Isn’t it time to back projects that can deliver in the meanwhile?

Sorwar Ahmed runs UrbanEngagement Ltd., an independent community engagement, planning and regeneration consultancy. He is part of the team commissioned by Locality to evaluate the Building Community Neighbourhood Planning Support Scheme, one of the four national providers of neighbourhood planning support funded by the Department of Communities and Local Government. For more information, contact:
Sorwar@urbanengagement.co.uk
(www.urbanengagement.co.uk)